I have to say I thought Bugs was my favorite bunny until I saw this cute little bunny pop up on one of my friends Facebook posts.  I started following his page and I gotta say nothing gets me in a good mood then looking at the bunny in a new scenario each day. I reached out to Michael because I had never seen something like is, and asked if he would be willing to do a little interview and let me share his passion with others. Ladies and Gentleman I give you Michael Balzano!

1. Tell us a little about yourself.

My name is Michael Balzano. I’m a graphic designer and an illustrator who lives in the woods in central Vermont. Oh, and almost every day for the past three years, I’ve drawn a Bunny comic called My Daily Bunny.

2. When did you catch the creative bug?

I’ve been drawing since I was a child. My earliest memories are of trying to recreate the comics from the Sunday paper, coloring, writing books, and illustrating the animals from my National Geographic flash cards. Simply put, I wouldn’t say that I caught the creative bug as much as I was born with it.

3. What does “being creative” mean to you?

This is a really interesting question. I tend to think of “being creative” as more of a cerebral, problem-solving mechanism. I probably get that from my design background. Now, don’t get me wrong, I love the creation process. But, to me, creation is an execution of creativity. Decisions and improvisations are made in the process, but overall, I think of creativity as a mentality and that is how I approach all of my work.

4. How would you describe your art and/or process?

I used to have trouble defining both my art and my process. However, I had a sort of epiphany recently and I think that I have a reactionary and improvisational creative mind. My creativity arises as a response to the world around me. Things I read, or see, or hear start to fire associations in my brain that more often than not manifest themselves in visuals. My job, then, is to give those visuals life. That’s kind of how my brain works in general. I’ve always been able to make connections very quickly. My artistic process tends to fall along that path as well.

5. What has been your favorite thing to create or style to create?

My passion has always been focused on illustration. I love the range of precision that drawing allows. More specifically, I love children’s book illustration and graphic novels. I dabble in realism and I enjoy many other art forms, but I always come back to illustration. I’m the most myself when I’m in the zone and drawing like mad.

6. Name a craft product you can’t live without?

I’m not sure if it counts as a craft product, but you’d be hard-pressed to find me without a Micron Black 02 Ink Pen in my hand or in my pocket. (Man, I wish I were on TV, because then the Micron folks would definitely be shipping me a whole crate of those suckers right now!)

7. If there were a magic power you could use in your art making, what would it be?

Oh wow. I’m thinking that a little telekinesis would help me multi-task a little easier!

8. Why did you choose a bunny?

I get asked this question all the time. The full story is quite long, so I’ll give you the abridged version. While I was developing this character (who started out in human form, by the way), I realized that I didn’t want to utilize dialogue. Using that focus as a guiding principle, I realized quickly that I needed an entity that could use features other than the usual to express emotions. That, combined with the fact that the character also didn’t have a mouth or, really, much of a face in general, led me to long, floppy ears. Hence, a bunny!

9. Any advice for those out there who think art is too hard?

I think that people get caught up in the “difficulty” of art when they concentrate too much on trying to create existing artworks that they’ve seen or that they admire. My advice is to focus more on the conceptualization and the process of creating. Have fun coming up with ideas. Appreciate the journey. Learn to love the process. Be entertained by the mistakes and mishaps. And, get dirty. Create a mess. Have fun.

Here is just a little taste of the Bunny 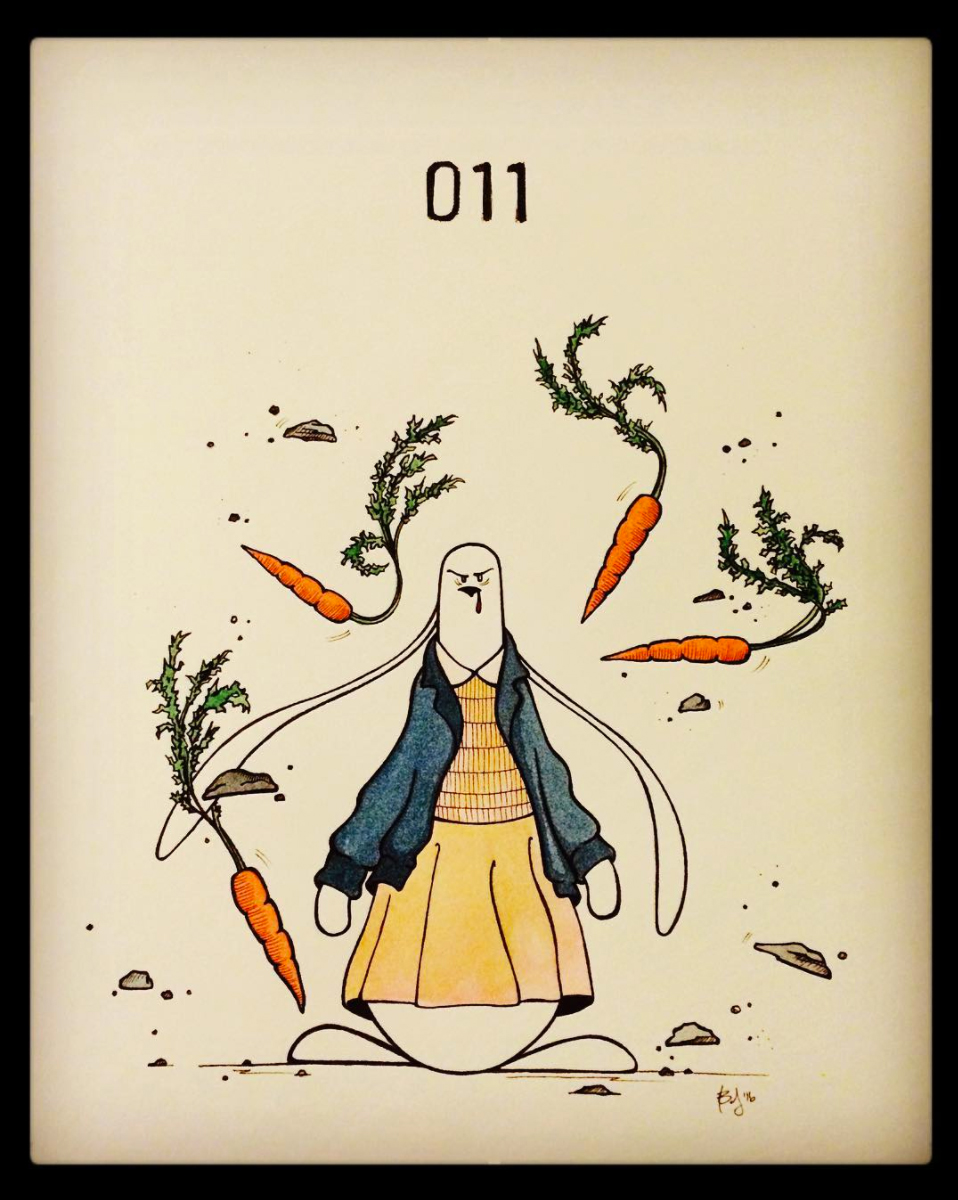 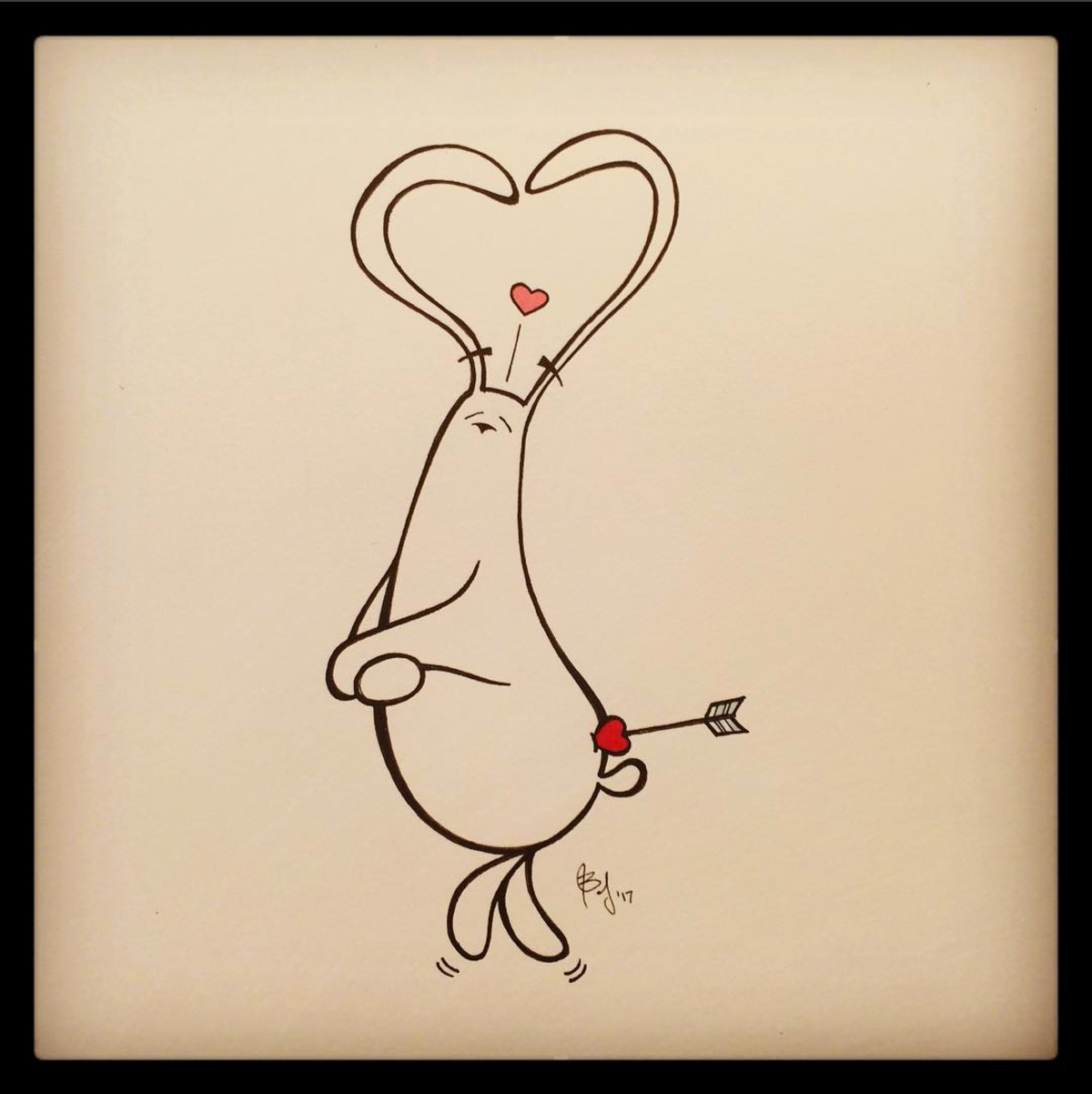 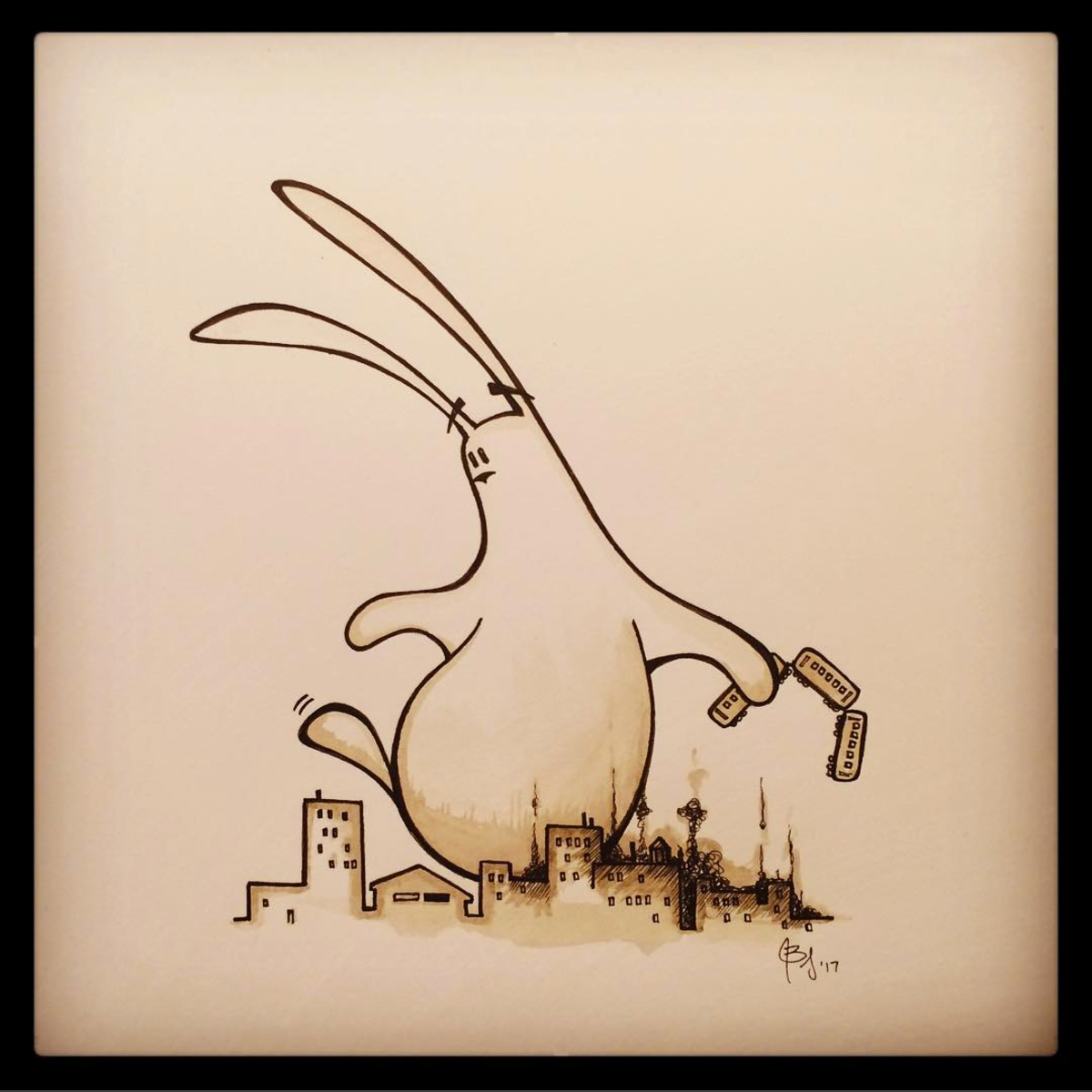 10. If we wanted to learn more about you and your art where can we go? (if you have other social media outlets)

I’m pretty private, but The Bunny LOVES attention. You can follow The Bunny on Instagram (@mydailybunny), Facebook (My Daily Bunny), or on Tumblr. And, if you’re interested in taking an original Bunny home with you, check out mydailybunny.com.